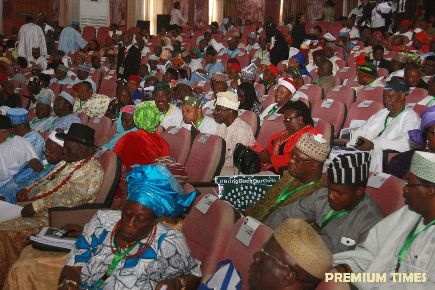 There are indications that the issues may be contentious as in the past conferences.

The National Conference will, Monday, begin its final debates on some of the most stormy subjects before its 492 delegates, with the emotive issues of resource control, derivation principle, revenue sharing formula and offshore/onshore dichotomy, set for consideration.

The issues, which come under Devolution of Powers, were contentious during the committee sittings, splitting its 30 members along ethnic and sectional lines. They were equally controversial during the previous conferences of 1994/1995 and 2005.

The committee’s report is the last to be considered at the plenary session of the conference which ends on July 17.

The panel was chaired by a former governor of Akwa Ibom State, Victor Attah, and a former Inspector General of Police, Ibrahim Coommassie, who is also the Chairman of Arewa Consultative Forum, ACF, a socio-cultural group comprising the 19 states of the North.

The 492-member conference has already considered and voted on the recommendations of 19 committees and amendments proposed by the delegates.

The others are Land Tenure Matters and National Boundary; Economy, Trade and Investment; Energy; Religion; Public Finance and Revenue Generation; Immigration and other Related Matters.
The consideration of the report of the Committee on Devolution of Power might turn out to be contentious, not only because of the touchy issues it covered, but also because it is the only committee with a minority report prepared by one of its members, Annkio Briggs, a Federal Government delegate from Rivers State.

The northern delegates have already rejected some of the resolutions adopted during the debate on the report of the Committee on Political Restructuring and Forms of Government last week. The action may lead to a walkout by the delegates.

In the terms of reference given to it, the Devolution of Power Committee was asked to consider issues that could be taken from the Exclusive to Concurrent and/or Residual Legislative Lists or vice versa. The issues are Fiscal Federalism, (which covers revenue sharing, resource control and sharing formula), Policing, Local Government administration and role to traditional rulers and institutions in governance.

During its sittings, there were intense arguments among its members thereby dividing them along north-south line, both of which came with varied agendas.

The northern delegates canvassed the scrapping of interventionist institutions and agencies such as the Federal Ministry of Niger Delta and Niger Delta Development Commission, NDDC.

The South-South delegates demanded either full control of its resources or 50% derivation formulae.

Among the key recommendations contained in the 42-page report of the committee produced at the end of its sitting in May, are that Item 39 in the Exclusive List- Mines and minerals, including Oil Fields, oil Mining, Geological Surveys and natural Gas – should remain there provided: “The Governments of states where the mining activities take place shall be involved in matters relating thereto.”

It also resolved that the Federal Government should create a special fund to develop mines and minerals in states where such resources are undeveloped. It recommended that 4.5% of the total revenue accruing to the Federation should be devoted to the Fund.

The committee said in making the recommendation, it considered the overriding need to bring all the other mineral resources of the country, hitherto undeveloped, into mainstream development by activating National Strategic Plan for Exploiting of all minerals so as to boost their contributions to the Gross Domestic Product, GDP.

It also recommended that the sharing of funds accruing to the Federation Account should be as follows: Federal Government share be reduced from 52.68 to 42.5%, State Government be increased from 26.72% to 35% and Local Governments from 20.60% to 22.5%.

It also recommended that rather than have states control their resources, the 13% derivation as contained in the 1999 Constitution be retained with a proviso that a percentage of the 13% derivation devolves to the host communities from which the resources are derived.

The committee recommended that the issue of offshore/Onshore dichotomy should be left as it is.

Minority Report
But in her 11-page minority report, Ms. Briggs said within the frameworks of the federal principles, the proposed Constitution of the country should provide for the ownership of natural resources by states of the Federation, “which shall pay no more than 50% of the revenue from the exploitation of those resources to the Federation.”

She also proposed that 10% of the proceeds from the exploitation of mineral resources should be set aside for communities directly affected by minerals exploitation activities. Such a fund, according to her, would help in ameliorating the environmental degradation and other factors that leads to loss of community livelihoods in sites of extraction.

“It is important to note that the principle of state ownership of mineral resources and the Derivation Principle are not for oil and gas alone, but for all mineral resources, including bitumen and solid minerals,” Ms. Briggs stressed.

Previous recommendations
The issues of resource control, derivation principle and revenue formula were contentious in the previous conferences. However, the 1994/1995 Constitutional Conference convoked by the late Head of State, Sani Abacha, in its report recommended not less than 13% derivation formula.

The report added, “However, that the figure of the allocation for derivation shall be deemed to include any amount that may be set aside for funding any special authority of not less than five years from the day the bill shall be assented to by the President.”

On mining activities, the Conference recommended that “At least 50% of funds allocated to OMPADEC should be devoted to the rehabilitation of the environment of oil producing areas.”

The Conference had also recommended that in the interest of peace, progress, and unity and having regard to the fact that Federal Legislation supercedes that of the states, the issue of mines and minerals, including oil fields, oil mining, geological surveys and natural gas be retained in the Exclusive List.

“There is a need to avoid a situation where wrong decision may hinder the exploration and exploitation or encourage the opposition by inhabitants of the areas where the exploration activities are taking place,” the report warned.

The National Political Reform Control, NPRC, convoked by former President Olusegun Obasanjo recommended the increase of derivation fund from 13% to 17% pending the report of an Expert Commission to be appointed by the Federal Government.

“Delegates from the South-South and other oil producing states insisted on 50% as the irreducible minimum. Having regard to national unity, peace and stability, they are willing, however, to accept in the interim 25% derivation with a gradual increase to attain the 50% over a period of five years,” NPRC Report added.

Prior to the recommendation, the issue of resource control had torn the Conference apart with the delegates from the oil-rich South-South staging a walkout on June 14, 2005. A member of the Conference also submitted a minority report on the issue. 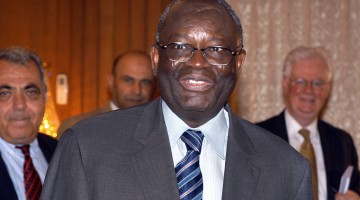