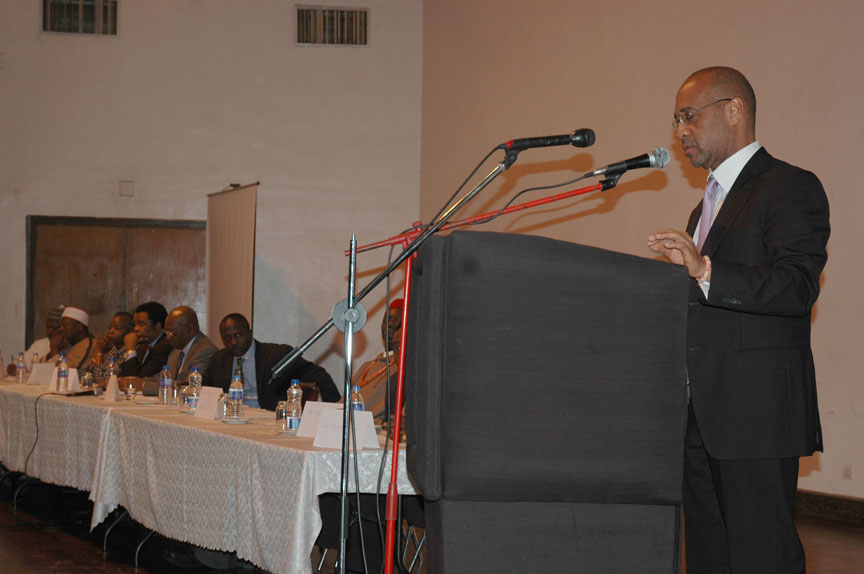 CONSUL GENERAL BRIAN L. BROWNE delivers a speech at the Inauguration of the National Think Tank

I feel honored and pleased to be here among so many distinguished people and so many of my friends. Establishing this Think Tank is a fine and noble effort that should be applauded. In the life of a nation and for the well-being of that nation it is always a good thing to think.

To be a thoughtless people, to be a thoughtless nation is to relegate oneself to the shadows and of human history. It is to see opportunity come, only to scoff at it. It is to beckon folly to enter your house and treat as if it were a cherished relative or family heirloom.

Let it never be said that Nigeria did not employ its tremendous human capital to strategize about its present conditions and the future of this land. On the other hand, let it be said that Nigeria; by putting its collective mind in action, attempted to climb and did in fact reach the upper rungs of the ladder of human progress and development. Let it be said that those of us gathered here today thought wisely and well so that we shaped Nigeria’s future in a manner that improves upon the contours of its past and present.
Now caution would dictate that I skirt around a certain rather large issue as if it did not exist. But a much larger concern and care from this country and the people who inhabit it demand that I do otherwise. Thus, for a moment let me not talk to you formally as a diplomat, but informally as a friend.
In every nation, at every point in its history, there will be political divisions. If you examine any grouping of human beings, it is impossible for all to believe the same thing, the same way, at the same time.

This diversity when properly channeled leads to constructive debate and positive innovation. However, when poorly managed, it will enervate the body politic and lead to a typed tense stagnation. It is precisely because of this inherent diversity of the human species that democratic government has through the years and centuries of man’s struggle against his own vices, slowly become established as the best form of government. For democracy, when practiced correctly, recognizes respects and protects this innate human diversity.

However, although some type of political diversity is part and parcel of the human condition, statesmen in society must strive to manage and minimize the severity of these divisions. The greater the division a nation faces, the more uncertain becomes the pace of that nation’s progress.
The events of the past few months have exacerbated the Nigerian political divide. I am not here to cast blame or aspersion nor to commend nor condemn any person or party. The time is too short and the moment too heavy for that endeavor. What I would like to do is offer a bit of friendly advice.

Previous post 1999 CONSTITUTION OF THE FEDERAL REPUBLIC OF NIGERIA