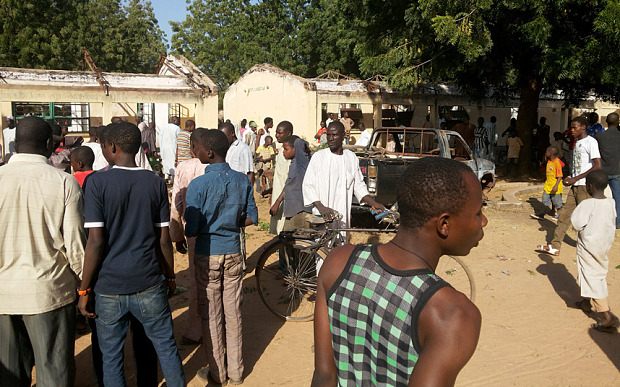 A FRESH wave of violence that swept through Borno State has claimed scores of lives and resulted in the destruction of public buildings and a divisional police station.

The tragedy occurred as gunmen suspected to be Boko Haram’s members in a convoy of Toyota Hilux vehicles and motorcycles attacked Shani town on Saturday night.

Shani is a council headquarters bordering Adamawa State, and 260 kilometres south of Maiduguri, the state capital.

In a telephone interview in Maiduguri yesterday,   a resident who survived the attacks said that the gunmen caught the residents unawares when over three dozens of them attacked the town shooting sporadically at any person in sight, before setting ablaze public buildings and the police station, two kilometers from the central market.

“I was very lucky; it was God that saved my life that Saturday night, because many of my neighbours and colleagues were shot dead, while several residents fled into farmlands and bushes with gunshot wounds. Some of them may die in the bush, as insurgents on motorcycles pursued the fleeing residents that night,” said the resident on how Shani was attacked.

He said Saturday’s attack brought to three times that the insurgents torched the police station and office of the Independent National Electoral Commission (INEC), and the council’s comprehensive health care centre along with several houses and shops this year.

On how Shani was attacked, he said: “They came on about a dozen motorcycles from Gwaskara axis well armed with Ak47 rifles, Improvised

Explosive Devices (IEDs) and petrol-bombs wreaking havoc without being confronted by anybody as there were neither military operatives nor police to assist the civilians who were fleeing for their dear lives.

“As I am talking to you now, I left my people running towards Pakaina village for safety; it is only God that will know what is happening with the sporadic gunshots that engulfed the entire council area.”

All efforts to get confirmation from the state Police Public Relations Officer, Gideon Jibrin, were however futile, as he could not be reached through his cell phone.

But a military source who was not authorised to speak said there was an attack on Shani by suspected insurgents in southern Borno at the weekend.

For the apex Northern Islamic body Jama’atu Nasril Islam (JNI ), the recent attacks particularly the Kano bomb  blast are part of a plot  to justify the extension of  the emergency  rule in the north east.

The President General of the JNI is the Sultan of Sokoto, Alhaji Muhammadu Sa’ad Abubakar 11. At a press conference in Kaduna yesterday by the Secretary General of the JNI, Dr. Khalid Abubakar Aliyu, the group said that it was shocked at the carnage in a Kano mosque last Friday.

“We are indeed shocked and pained beyond words over the news of the bomb blasts in Kano Central Mosque, which claimed the lives of over one hundred innocent Muslims (only Allah can ascertain the total death toll) that have gone for worship and within a twinkling of an eye sporadic shootings ensued targeting worshippers who tried escaping the inferno. On a similar day, precisely Friday, 20th of January, 2012, several coordinated bomb blasts rocked Kano, yet no body was prosecuted and nothing is done to protect the lives of the citizenry. But must blood be spilled to justify the extension of the state of emergency? Why is it that any time the ineffective state of emergency is about to elapse and or an extension is being sought, attacks are carried out with sophistication?”

The group queried further: “Are we really aware of the repercussions of spilling the blood of innocent souls? What is the essence of the government’s war on terror and its attendant huge budget? Where are the intelligence and security agencies? Can we afford to continue relying on them for our safety and security? Why? Why? Why? We ask ad infinitum with no satisfactory answers. Without mincing words, Nigeria is being misgoverned to the brink!”
Condemning attacks on Muslims, JNI urged them to remain calm and observe happenings around them, and take all defensive measures within the purview of the laws to protect themselves since government had clearly failed.
“We deeply sympathise with all the affected victims of the recent Maiduguri Monday Market bomb blast, the Mubi attacks and the Kano Central Mosque bomb blast and also condole with the families of those who lost their lives in the unfortunate incidents. May Aljannatul Firdaus be the abode of all the deceased, Amin.

“As usual, JNI calls on all authorities concerned to be manifestly committed to their responsibility of protecting the lives and property of Nigerians as no development can be achieved in a situation of fear, insecurity and chaos,” it said.
“All imams and their respective followers are urged to intensify special prayers, because according to the Prophet (PBUH) ‘Prayer is the weapon for the believer.’ Therefore, prayers like HASBUNALLAHU WANI’MAL WAKIL AND LA HAULA WALA QUWWATA ILLA BILLAH, AND INNA LILLAHI WA’INNA ILLAIHI RAJI’UN, among others should be repeatedly recited as much as one could. Likewise we reiterate the previous directives of His Eminence, Alhaji Muhammad Sa’ad Abubakar on Al-Qunuut for peace and security to be restored in Nigeria.”

But while some stakeholders have criticised the military for not being able to defeat the terrorists, former Head of State and a presidential aspirant of the All Progressives Congress (APC), Major-Gen. Muhammadu Buhari (rtd) has exonerated the armed forces from the Boko Haram’s insurgency.

Addressing Enugu State delegates of the APC to the forthcoming presidential primaries of the party, Buhari noted that “soldiers have been complaining that they are ill-equipped, in spite of the trillions spent on defence budget in the last three years.”

The APC presidential aspirant who was accompanied by former Minister of the Federal Capital Territory, Malam Nasir El Rufai and Chief Audu Ogbe, observed that 2015 would be another landmark year in the history of Nigeria.

“If you consider the foreign revenue Nigeria has generated since 1999, you will be shocked at how inefficient and corrupt the Peoples Democratic Party (PDP) has been. Soldiers have been saying they are ill-equipped, yet trillions have been voted for defence in the last three years.

“If we don’t vote out PDP, it will vote out Nigerians and we will all be the losers. Cast your votes for us so that we can all fight this inefficiency and corruption,” Buhari said.

He advised the party members to get their Permanent Voters Cards (PVC’s), which is the only ammunition to vote out PDP and make sure their votes count in the 2015 general elections.

On his part, the Speaker of the House of Representatives, Alhaji Aminu Waziri

Tambuwal yesterday said that the Federal Government should ensure that the security challenges ravaging some part of the country do not affect the conduct of the 2015 general elections.

Tambuwal spoke at the All Progressives Congress (APC) North West Zonal headquarters in Kaduna, where he was cleared by the screening committee to contest the Sokoto State governorship primaries along with some other APC aspirants from states in the zone.

The speaker also explained why he declined to vie for the presidency, saying that “I have to succumb to the advice by my friends and other important people that I should drop the plan for the presidential bid… and it is in response to clarion calls by the people of Sokoto State for me to offer myself to serve in the capacity of governor of Sokoto State.”

On Boko Haram insurgency in the north, Tambuwal said: “What we should hope and pray for is that before February the insurgency challenges should be addressed by the government. There are people whose responsibility it is either as number one citizen in the country or chief of army staff or the national security adviser to ensure  the safety of the citizenry as established by the constitution.  They should do their work and ensure that we are secure and safe.

“And then let us hope and pray that by February we would be able to come out and cast our votes.   We shouldn’t be playing up this card of insecurity continually up till beyond February. What we should do is that we should be positive such that the government should ensure that the security challenges are addressed.

“There are security challenges in Afghanistan, Iraq and several other countries. What we should do is to address and make up our minds on the fact that there should be election in February 2015,” the speaker said.