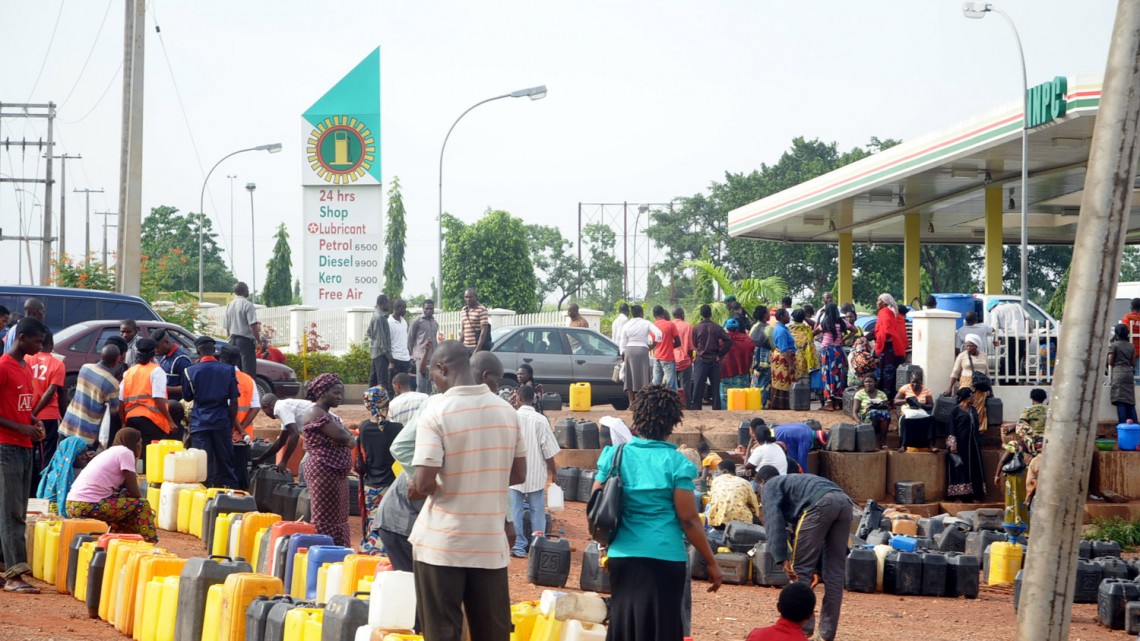 The fuel scarcity situation in the country has taken a turn for the worse as reports on Saturday indicate.

Investigations by our correspondents all over the country showed that most filling stations in the land are not selling Premium Motor Spirit also known as petrol.

This, SUNDAY PUNCH learnt, escalated the already dire situation, forcing motorists and other consumers to the black market.

Investigations also showed that the pump price of the product in the few filling stations who had it ranged from N120 to as high as N400 per litre.

The high price of the product, according to our correspondents, has caused a hike in transport fare with the increase as high as 300 per cent in some places. Many commuters who were caught unawares by the development were seen trekking long distances to their destinations while others were forced to return home.

Most filling stations in the Federal Capital Territory have shut down following the non-availability of the commodity.

The few stations that were dispensing the product had long queues of vehicles with desperate motorists besieging their gates with the hope of getting fuel to pursue their economic and social activities.

However, black marketers were not short of supply as they chased after vehicles along the road selling fuel at N200 per litre to those who could afford it.

Some stations sold fuel at N140 per litre, but few motorists patronised them, preferring to stay in the queue for hours to buy at the official N87 per litre.

Checks showed that most filling stations in the satellite towns including Kubwa, Zuba, Nyanya, Kuje and others sold fuel for N140 per litre.

In Osun State, the situation became worse on Saturday with virtually all filling stations in Osogbo, the state capital remaining shut .

Our correspondent observed that the few filling stations which sold the product on Friday sold it for N150 per litre.

The fuel scarcity forced some residents of Osogbo and other towns including Ede to stay indoors except for those who had very important things to do.

A commercial bus driver, who identified himself as Taye, told our correspondent that the increment in the fare had forced commuters to resort to trekking.

He said, “We just pray that the situation will become normal next week. We are really suffering. There are no commuters on the road; it seems everybody is indoor.”

The fuel scarcity has also forced commercial motorcyclists in the state to increase their fare and thus making many residents to complain.

The situation is not different in Benue where the product is currently sold for between N130 and N150 in Makurdi, the state capital, and major towns of Gboko, Kastina-Ala and Otukpo even as it is hard to come by.

In Taraba State, the situation was largely the same. The product which was sold for between N150 and N160.

In Rivers State, motorists faced a tough time as the commodity remained scarce within Port Harcourt, the state capital. Long queues were noticed in many filling stations that sold fuel. This was between N120 and N140.

In Calabar, petroleum depots were virtually dry. This put so much hardship on motorists and commuters as the price of a litre of petrol went up to between N150 and N250 at independent filing stations and the black market.

Filing stations owned by major marketers did not sell fuel. It was gathered that the major marketers are making brisk businesses by selling their products at the depots to independent marketers at a higher price.

Transport fare had also rose to more than 100 per cent within the Calabar metropolis.

The only NNPC Mega Station along the Murtala Mohammed Highway that was selling fuel had long queue stretching over three kilometres.

A motorist, Mr. Ben Amajo, who said he had spent more than five hours queuing up at the NNPC Mega Station, said he was completely fed up with the situation in the country.

Most of the active filling stations in Enugu State were selling petrol between N140 and N150, while the commodity sold mostly at the cost of N125 and N130 per litre in Abia and Ebonyi states.

The situation was the same in Imo and Anambra states.

Apparently, as a result of the cost of the commodity, there was no queue in most of the filling stations.

However, several filling stations had no fuel.

But there were long queues at the NNPC filling stations, which sold at the official N87 per litre fuel whenever they had the product.

In Jos, Plateau State, most of the independent marketers, though displayed pump prices ranging from N140 to N150, sold above that. Black marketers also had a field day as a four-litre jerry can went for between N800 and N900.

The situation was not different in Bauchi and Lafia where roadside sale of petrol had a big boom. Long queues were still noticeable in most major marketers, especially NNPC mega stations.

The fuel scarcity in Owerri was fierce. Filling stations fixed their pump price at 130 per litre. Most filling stations in the communities our correspondent visited sold the commodity for N140.

The development hampered economic activities in the state.

Motorists in Edo and Delta states were full of tales at the weekend.

Checks by our correspondent on Saturday showed that while most of the major filling stations on the busy Akpakpava and Sapele road in Benin, did not sell the product, some private fuel stations around Oluku sold at the price of N130 per litre.

Black marketers, who had taken advantage of scarcity, sold 10 litres of the product for N1450 and N1500, depending on the bargaining ability of the buyer.

The situation was also not different in major parts of Delta where the non-availability of the product resulted in an increase in the cost of public transport in major cities.

Petrol was sold for between N260 and N300 per litre in Sokoto and neighbouring Kebbi State. Most motorists in the two states relied on road side hawkers of petrol as most filling stations either did not have the product for sale or were selling to hawkers at a higher rate.

Mr. Mohammed Shehu, a resident of Mabera in Sokoto town, told SUNDAY PUNCH via telephone that motorists had always been at the mercy of hawkers of the products.

Some residents of Nasarawa and Adamawa states on Saturday expressed displeasure over the endless fuel scarcity across the nation as pump prices rose to N160 per litre on Saturday.

The situation was a little different at both NNPC mega station in Nasarawa and Adamawa states, that sold fuel for N100 per litre.

In Niger state, the majority of petrol stations sold for N130 per litre. Our correspondent who went round Minna confirmed that it was only the NNPC that was selling for N87 per litre.

It was observed also that a lot of fuel stations were closed as a result of high price and a lot of people queued up for hours to get fuel.

One of the commuters, Isah Mohammed, who spoke to our correspondent said he had been at NNPC patrol station since 5.30am and it didn’t get to his turn.

In Kaduna the situation was the same, other petrol stations were selling for N130 per litre except NNPC.

However, there were no queues.

Most of the filling stations visited in Katsina metropolis had fuel, but while some sold at between the above said price, others along the outskirt sold above the price.

In Bayelsa a litre of petrol was sold for between N140 and N200.

The NNPC mega filling stations in the Yenagoa metropolis were selling the products at the regulated price of N87 per litre but the queues were extremely long.

The situation was not different in Kwara and Kogi states.

Investigations by our correspondent in Ilorin on Saturday showed petrol was sold for N150.

Also in Lokoja, the Kogi State capital, a litre of petrol was sold for N120 but between N170 and N200 in the hinterlands.

The high cost of fuel had also increased transport fare between 50 and 70 per cent in Kwara and Kogi states.

Motorists and passengers in Ogun State also bought the product at a high cost. From Sagamu, Ijebu Ode, Ilaro to the capital city of Abeokuta, the situation was the same.

Filling stations in the state, mostly owned by independent marketers, dispensed a litre of fuel between N150 and N300.

Transportation fares had increased by over 100 per cent on both intra-city and inter-state routes.

In Yobe and Borno states, petrol sold for N130 at filling stations.

In Bauchi and Gombe, it was for either N145 or N150 at very few filling stations, with resultant long queues. Many motorists were left with the option of buying at black market at the price of N200.

Major businesses in these states are beginning to close shop due to the scarcity of fuel and diesel.

On Saturday, one of Nigeria’s telecommunications firms, said the scarcity of diesel was jeopardising its operations. It said, “The management of MTN states that the current diesel scarcity in most parts of Nigeria is posing a significant threat to quality of service and the ability to optimally operate the network.

According to the Corporate Services Executive, Akinwale Goodluck “Most of our base stations and switches are powered round-the-clock by Diesel generators and the current fuel shortage has drastically reduced the availability of diesel supply to key locations.”

“MTN’s available reserves of diesel are running low and the company must source for a significant quantity of diesel in the very near future to prevent a shut down of services across Nigeria. If diesel supplies are not received within the next 24 hours the network will be seriously degraded and customers will feel the impact.

“MTN is working with all stakeholders to ensure services remain. MTN sincerely apologises for any outages and inconvenience that may occur and seeks the understanding of customers at this time.”

Next post Jonathan deserves a good place in history — Odumakin