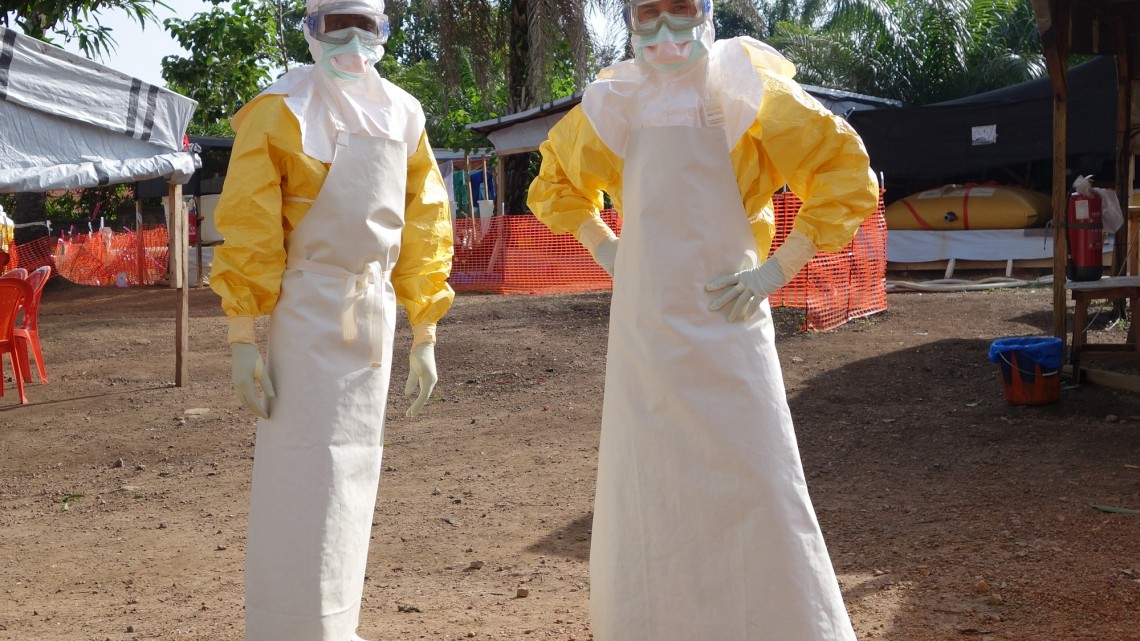 The World Health Organisation on Monday in Abuja   declared that Nigeria was now free of the Ebola Virus Disease.

The WHO Country Representative in Nigeria, Dr. Rui Gama Vaz, said that 42 days after the last person in possible contact with the virus was taken for observation, no new case had been recorded in the country.

He said the feat meant that twice of incubation period after the last   case   tested negative for the EVD, the chain of transmission in Nigeria had been broken.

The clean bill of health came exactly three months after EVD   was brought to Nigeria by a Liberian-born     American diplomat, Patrick Sawyer.

Vaz said, “The virus is gone for now. The outbreak in Nigeria has been defeated. This is a spectacular success story that shows to the world that Ebola can be contained.”

He however warned Nigeria that the war against the virus would only be deemed over when countries like Liberia, Sierra Leone and Guinea overcame the challenge.

“It must be clear that the war has not ended, the war will only end when West Africa is also declared free of Ebola,” the WHO boss in Nigeria added.

His warning was also reechoed by three prominent Nigerian scientists – Professors Tam David-West, Innocent Ujah and   Adedeji Onayade – who said that Nigeria must not let its guard down.

Vaz, on behalf of the WHO Director-General, Margeret Chan, congratulated Nigeria, President Goodluck Jonathan and all stakeholders and development partners “that made it possible to contain the Ebola outbreak in Nigeria.”

He said, “When the laboratory confirmation of the country’s first Ebola disease case in Lagos was announced on July 23, the news rocked public health communities all around the world. Nigeria is Africa’s most populous country and its economic power, the number of people living in Lagos are around 21 million, almost as large as the population of Guinea, Liberia and Sierra Leone combined.

“Thousands of people move in and out of Lagos every single day looking for work or market for their products with frequent gridlocks of vehicular traffic. How can contact tracing be done under this situation, this is the question that was raised at the beginning shortly after the Ebola case was announced.

“We need to continue sharing the Nigeria’s experience and country’s expertise to help other countries to urgently contain the epidemic and support others in their preparedness to the response plans.”

The WHO boss said, “If a country like Nigeria can do this, eradicate Guinea worm disease and contain Ebola, make significant progress towards interrupting polio transmission all at the same time, any country in the world experiencing an imported case is just an hand full of cases.”

A representative of the United States Centre for Diseases Control and Prevention, Dr. Pauline Hervey, who attended the briefing, described the feat by Nigeria as “a remarkable achievement.”

She said, “We want to appreciate the response that has gone in to take this outbreak. Many outbreaks have occurred in Nigeria, it is very interesting to note that a lot of the progress that is made comes indigenously. We all know Nigeria has the resources, it has the minds, it has the goodwill and the competence to be able to stop diseases. We have seen that remarkably demonstrated in Ebola. With that I applaud you. Congratulations.”

According to her, the CDC has been working with stakeholders, private sector and communities “to do what we do best, to work with you underground shoulder-to-shoulder, rendering technical assistance, bringing the know-how, bringing the resources and also learning from you.

“We encourage you to strengthen you preparedness planning so that any other outbreak that attempts to come into Nigeria will be stopped just as you have done in the Ebola case and even in more rapid response.”

The WHO declaration came on the same day Prof. Onyebuchi Chukwu, formally resigned as Health minister and handed over to the Minister of State, Dr. Khaliru Alhassan.

Chukwu, who attended the briefing   described WHO’s declaration as a “dignifying deal” on the work of the Health ministry.

He said Nigeria could not have conquered Ebola without strong, effective leadership and partnership.

Warning that   “a reinforced Ebola virus could still invade Nigeria, “he said that “given this risk of a possibility, there’s need to maintain a high state of alertness at all our ports of entry.”

Shortly before handing over, Chukwu called for a supranational structure led by the United Nations and operated through regional groups as ECOWAS in order to maintain momentum against infectious diseases such as Ebola.

“We cannot afford to lower our guard. This risk and the risk to other countries can only be eliminated through the setting up of a system similar to the Nigerian one under the leadership of the UN but with the operational wing built around ECOWAS,” he advised.

Outgoing Minister of Information, Mr. Labaran Maku, described Nigeria’s Ebola-free status as “heartwarming for all Nigerians all over the world.”

President Goodluck Jonathan welcomed the development and gave credit for the Ebola-free status of the country   to all health workers, volunteers and ordinary Nigerians who made the feat possible.

Jonathan, in a statement   by his Special Adviser on Media and Publicity, Dr. Reuben Abati, lauded all Nigerians, especially those who made the supreme sacrifice to contain the spread of the virus in the country.

He said the success recorded was a testimony of what Nigerians could achieve if they burry their differences and remain united.

The statement read in part, “President   Jonathan welcomes the declaration by WHO that Nigeria is now officially Ebola-free after 42 days without any incident of the EVD.

“President Jonathan dedicates the certification to the many patriotic health workers, volunteers and ordinary Nigerians who worked tirelessly, some of them paying the ultimate price, to stop the deadly virus in its track after it entered the country in July this year.

“The President seizes this opportunity to also reiterate his appreciation of the contributions of state governments, WHO and other international health organisations, relatives of infected persons and other Nigerians who either courageously underwent the rigours of being quarantined or complied with all directives issued by health authorities to defeat the virus.

“He believes that Nigeria’s globally-acclaimed success against Ebola is a testimony to what Nigerians can achieve if they set aside their differences and work together, and calls on Nigerians to strive to replicate the unity of purpose and all-hands-on-deck approach adopted against Ebola in other areas of national life.”

The achievement notwithstanding, Jonathan warned that Nigerians must be on the alert and vigilant to avoid fresh outbreak.

To this end, he directed that all measures taken after the entry of the virus into the country should remain in place.

The statement added, “As the nation applauds the success of its collective effort to stop the transmission of the Ebola Virus within Nigeria however, the President warns that the entire country must remain fully alert and vigilant against the re-entry of the virus.”

“President Jonathan fully shares the view expressed by WHO in its congratulatory message to Nigeria that while we have won a battle against Ebola, the war will only truly end when West Africa, Africa and the world are declared free of Ebola.

“The President consequently directs that all the anti-Ebola measures taken after the entry of the virus into the country should remain in place and that health officials should continue to actively screen persons entering the country through its air, land and sea borders for any sign of the virus.

“He also urges all Nigerians to continue to follow the anti-Ebola advisories on sanitation and personal hygiene issued by Federal and State Health authorities.”

Also on Monday, David-West, Ujah and Onayade advised the federal and state governments to   address poor funding of medical research in the country.

In separate interviews with our correspondents, they said the country should not be carried away by the clean bill of health given to it by WHO.

“We should continue to do what we are doing presently to safeguard the nation. Ebola is a deadly virus and   we must still be careful,” David-West, a foremost virologist and former Minister of Petroleum, said.

He stated that Nigeria must continue   to secure its borders in order to ensure that Ebola infected individuals did not come in through any of them.

“We must continue to be careful. I will also call on our people to be careful and live a healthy life. Unlike before, Ebola is now defined and certified to be deadly. But if we take the necessary care, it can be prevented,” he advised.

Ujah said the Federal Government must begin the process of facilitating the study of experimental drugs and candidate vaccines used in the prevention and treatment of the EVD by Nigerian scientists through its research institutes.

Ujah, who is the director- general of the Nigerian Institute of Medical Research, Yaba, Lagos,   said there was also an urgent need for both the federal and state governments to revamp the equipment and infrastructure in laboratories   in its teaching hospitals and research institutions.

He said, “We need to start studying the biology of the disease. We also need to analyse and look at the experimental drugs and vaccines. Once we can get a vaccine, then we can prevent it. We should also be able to conduct a clinical trial in humans.

“But to do this, the Federal Government must provide an enabling environment. In fact, it must reposition the equipment in our laboratories in the research institutes. Upgrade them to the standard of a P4-lab.

“A P4-lab is the only laboratory that is equipped with the equipment that will enable scientists to culture   live Ebola virus with minimal risk of infection.”

The virologist warned that in spite of the WHO declaration, Nigeria must not go to bed   until Ebola -stricken countries   were declared free of the virus.

Also,   Onayade said that Nigeria remained at risk as long as the EVD   was still present in some of its neighbouring countries.

Onayade urged scientists in the country to watch out for a local outbreak of the disease.

According to him, so long as there are fruit bats and other hosts of the disease in the country, the nation must be on its toes.

He said, “As long as we have the animal reservoir of the Ebola virus – the fruit bats, the possibility of a local outbreak also exists. We must remain vigilant and keep away any other desperate “ Patrick Sawyer” while maintaining close watchfulness to promptly detect any local outbreak, that is, one from within our borders.

“In the same vein, we must not ignore the possibility of a sudden, unannounced appearance of any other disease that may originate or sneak into our country like the proverbial thief in the night.”

Meanwhile, a former Vice-President, Alhaji Atiku Abubakar, has commended the successful eradication of Ebola   in Nigeria.

He said in a statement by his media office in Abuja that the   feat   would change the negative perception of the country by the outside world.

Abubakar, an All Progressives Congress presidential aspirant, added that the Federal, Lagos and Rivers states governments should be commended for the remarkable achievement.

He however   advised the entire country not to rest on its oars until the last vestiges of the   virus were destroyed.

Up to 4,000 people have been killed in the latest outbreak of Ebola across West Africa, and more than 8,000 infected since last December.

Eight of the 19 people infected with the virus in Nigeria died before it was finally contained. All others were successfully treated   without use of experimental Ebola drugs.