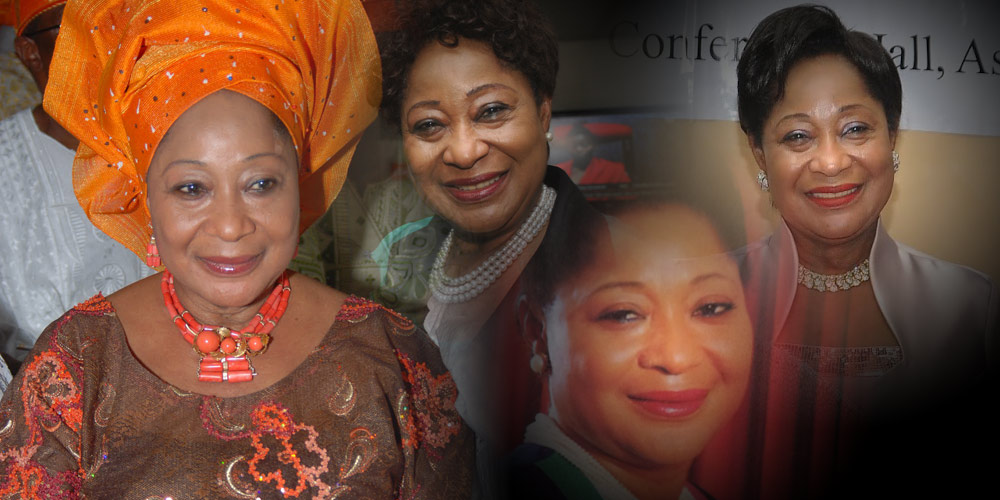 In a letter of congratulations addressed to the former minister, the President commended her remarkable achievements which he said emanated from her unwavering commitment to professional excellence and the highest ideals.

The letter read, “As you celebrate your 70th birthday anniversary on Saturday, November 1, 2014, it is with a profound sense of joy that I, on behalf of the government and people of the Federal Republic of Nigeria, felicitate with you and your family.

“Your noteworthy accomplishments have spanned the worlds of business, finance and administration up to the level of the membership of the highest decision making body of our nation, the Federal Executive Council.”

Jonathan also hailed the ex-minister for her worthy legacies which he said had become sources of inspiration to many people.

At 70, Chief Mrs. Onikepo Akande not only reflects on her life, but acknowledges the special grace she enjoys from God.

“God has been merciful to me,” she enthuses as this interview kicks off. “He has done many things in my life and if I start to relate them, it would fill a whole book. I have been extremely lucky; I have enjoyed good health and I’m reasonably successful in life. God has been kind and without my lobbying for anything, good things come to me. People are nice to me, not because I am special but God wants me to be blessed.”

Born on October 29, 1944, the accomplished industrialist, who is on the board of several companies, reflects on her 70-year-old sojourn in life: “Being 70 is very important to me and I am very lucky to be 70. Before now, I was so scared and prayed that God should spare my life for me to live long. This is because my mother and my uncle, Chief Olu Aboderin, died before they were 50. I threw a party when I was 50 and 60. I said I would do same for 70 and 80. Now, I am 70 and I thank God,” she says amid smiles.

There is no gainsaying the fact that she is fulfilled. “I am a fulfilled and happy person. That is why I always smile because I thank God. I have a special song which I always sing: ‘Elo ni mo san, fun Oba ogo, elo ni Jesu mi gba, fun ore re lori mi’.”

Of a laudable pedigree, the Harvard-trained professional is the firstborn of a family of four girls.

“My father was late Alfred Adisa of Ile Oluwo, Afobaje of Ibadan and my mother, Christiana Jadesola Adisa, nee Aboderin. My grandmother, Madam Janet Alatede Aboderin, was an extremely rich woman — one of the richest in Ibadan. From a tender age, I remember travelling to London on holidays with my late father and my grandmother, who also had a house in England over 60 years ago. Ours was a contented, happy life and I am extremely pleased with life. I have never been in want of anything.”

Still reflecting on her growing up days; Akande, who attended Queens’ School, Ede (now Ibadan) and the North-Western Polytechnic, London (now University of North London) where she read Accountancy, says of her parents: “My father had only one wife, and four children My mother died at 49. Her death made my sisters (Olori Moji Abass; Mrs. Olaide Ogundipe-Alatise and Ms. Mercy Adisa) and I become close. We would always talk to, respect and show love to one another. My father did not remarry. He was a decent, disciplined and highly intelligent man. He referred to us as his angels whenever people asked if he did not have a male child. I was happy that I made him proud before he died.”

A perusal of her resume is a reminder that she does not rest on her oars, her age notwithstanding. As an accomplished management and business consultant, she is a member of over 20 national committees, councils and associations. Still in touch with her roots, she bagged the traditional title of Ekerin Iyalode of Ibadan.

Her drive to remain successful is not far-fetched. Married to Chief Adebayo Akande MFR, a solicitor and Chairman, Splash FM, she reminisces on what influenced her as a child: “Being the first child, leadership was thrust at me when my mother died. I used to take her place during the extended Aboderin family meetings where I sat with big people. I’ve always been ambitious and as a child, my mother hired a private teacher for extra-mural classes for me. One day, he was talking about the death of a Minister, Bode Thomas then. I was interested in the story and I told him I would be a minster in this country someday. When I became a minister, he came to look for me at the ministry to remind me of this,” she explains.

To win in life, Akande proffers some of the tools she employs: “To win in life, you have to be nice to people and help them as much as possible. Moreover, I am still contributing my quota to the development of Nigeria. I was at Queen’s School, Ibadan to see the principal sometime and I saw that the administrative block was not looking nice. I promised to do something and being on the board of PZ Foundation, I requested help for my alma-mater and they constructed a brand new administrative block.”

The secret of any successful woman, she opines, is hard work. A delegate to the constitutional conference, Abuja, she abhors laziness. “Hard work is the secret of any success and you have to work hard no matter how you look. At any particular time, women should not think of beauty alone, but must continue to develop themselves. I am always one for training,” she says.

Now on her marriage, she glowingly reminisces on how she met her husband in London: “Then, I was a student in England and he was graduating as a lawyer. He came back to Nigeria before me and I returned too after graduation. We met again and got married.”

With a busy schedule like hers, you wonder how she juggles between her career and the home. “There is planning in everything. I try as much as possible to please him and I am sure he also does the same thing. He does not stop me and I thank God for that. For a marriage to last, love each other and be tolerant. There are few challenges that would come in marriage but just continue to do your best and pray to God to surmount all these challenges.”

Ever looking gorgeous, she reveals to love dressing up. “I just like to look nice and when I look in the mirror, I feel happy. I like bright colours because I do not want to be lost in the crowd,” she enthuses.

“Accessories? I am not one for diamonds but I prefer pearls. I used to wear white pearls right from a tender age. I like to wear hats too. I also wear both English and traditional wear. When I was Minister of Industry, I promoted the aso-oke fabric and other traditional attire were promoted. For formal wear, I wear good ones and try as much as possible not to be too fat for me to look nice in them,” she says.

A stickler for exercise, age, she explains, has made her adopt the less strenuous ones. “I have a massage chair that I sit on and I try as much as possible not to overeat. I must eat vegetables and fruits and I also take a lot of water. I do not drink alcohol. Sometimes, I get tired of drinking water and I drink juice because of the taste.”

At 70, she hardly spots wrinkles! Her hairline is full too. “I’m lucky to have a nice hair and it grows fast. My nails are intact and I have been blessed with a good skin. I visit the spa sometimes but not a lot because of time. I wish I had more time to do that. But what I eat also contributes to a good skin.”

To Akande, a fashionable woman is one who wears what suits her. “It is not necessarily wearing the latest trend but what looks good on you. Wearing what is pleasant for people to look is style,” she says.

At 70, she has this request: “I pray to enjoy the rest of my life in good health. I feel happy and I will keep on thanking God,” she concludes.

Previous post Why Every Woman Should Get Married –Former Minister, Nike Akande