2015: Why Jonathan Should Return 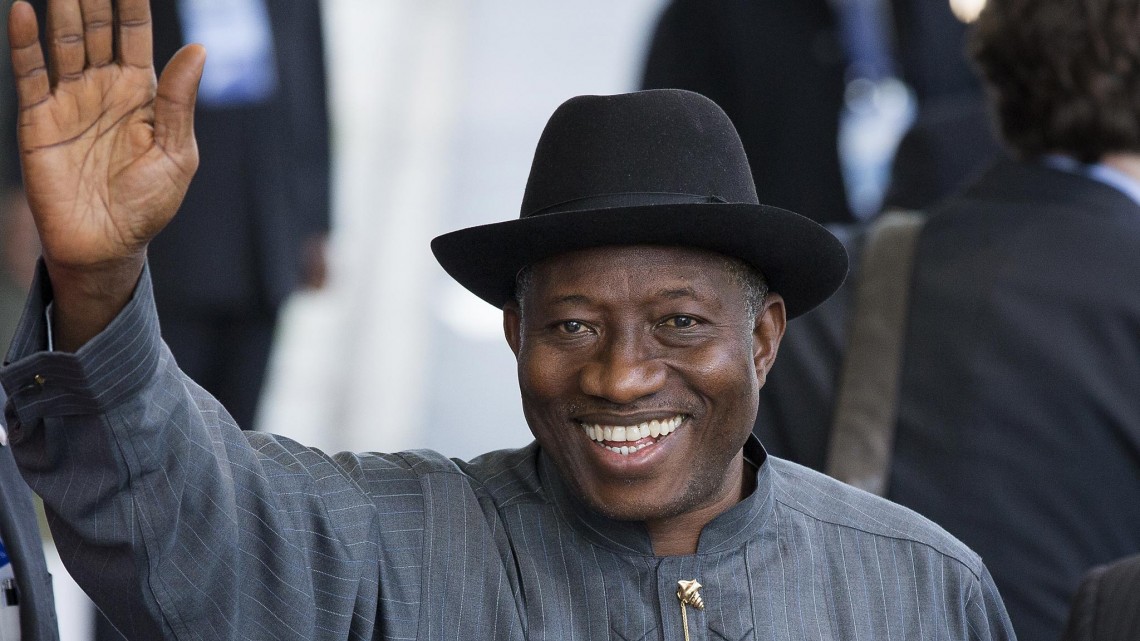 DANIEL Defoe, in his eponymous novel, Robinson Crusoe, writes: “We never see the true state of our condition till it is illustrated to us by its contraries, nor know how to value what we enjoy, but by the want of it.”

In other words, we take what we have for granted until we lose it.

Nigerians have the habit of disregarding the great works that any incumbent President does. It is when the leader leaves that his tenure is held in jaw-dropping nostalgia.

Consider this infinite regress: Goodluck Jonathan is worse than Umaru Musa Yar’Adua; Olusegun Obasanjo was less humane than Yar’Adua; Obasanjo was better than Abdulsalami Abubakar; Abubakar was more of a gentleman officer than Sani Abacha; Abacha was Adolf Hitler, Joseph Stalin and Benito Mussolini rolled into one, compared to Ibrahim Babangida; Babangida was more corrupt than Shehu Shagari and so on…

Right now, the same political culture is at play when the opposition spin-doctors want to use all facilities at their disposal to rubbish Jonathan and if possible, impugn his character.

They repeat the lies, misinformation and disinformation in the Goebelian propaganda style that if care is not taken, the electorate may be persuaded to think that Jonathan is another Jean-Claude Baby Doc Duvalier or Jean Bedel Bokassa.

Contrary to the position of these propagandists, Jonathan is a performer. I need to reiterate his achievements here, so that Nigerians may not regret losing a good leader.

This is to say that as he is in power now, let us appreciate his efforts and give him another chance to consolidate on them.

Let us begin with the latest challenge that Nigeria faced. When Patrick Sawyer of Liberia visited Nigeria, he brought with him the Ebola Virus Disease (EVD), which caused a lot of panic.

Although less than 10 people have died in Nigeria (Lagos and Port Harcourt), the Jonathan government put its political differences with the Lagos and Rivers states governments aside to jointly check the spread.

There was no case of ‘it is Peoples Democratic Party (PDP) or All Progressives Congress (APC)’ matter. In fact, the President declared it a national emergency.

To put a stamp of his seriousness on the matter, Jonathan approved a special intervention plan and immediate release of N1.9b to further strengthen the war.

A proof that the war against Ebola has been won in Nigeria is the September 22 secondary school resumption.

Another point to consider is the state of insecurity, made worse by the Boko Haram insurgency. We need to acknowledge that insurgency is not a conventional warfare where two opposing armies fire at each other.

Insurgents mix with civilians and any battle with them results in a lot of collateral damage, a situation that makes the rescue of the Chibok girls look like a tsetse fly that patches atop an old man’s scrotum, which requires a great deal of caution.

If the old man kills the insect with a hammer, he would gnash teeth. If he leaves it, it would suck blood. So, handling this matter is also like leading a cow out of a shop full of Chinawares.

Notwithstanding these, it is on record that at the beginning of last year, activities of the terrorist group extended to Kano, Kogi, Adamawa, Borno, Yobe, Niger and the Federal Capital Territory (FCT).

But these have been restricted to the Northeast as a result of what an analyst calls intelligence gathering, training of security personnel and provision of more equipment to the armed forces, the Police and other security agencies.

Part of the federal government’s package was the offer of amnesty to repentant members of the group, in line with the appeal of prominent Northern leaders and the setting up of a presidential committee to that effect.

Unfortunately, the sect has not appreciated the gesture and increased its war on Nigeria.

Moreover, the federal government declared a partial state of emergency in Adamawa, Borno and Yobe states in May last year, which helped the armed forces to perform.

Now, almost all the towns taken over by the sect have been snatched back by the Nigerian military.

In spite of the security challenge, it can rightly be said that under Jonathan, food production is of high priority.

Minister of Agriculture, Dr. Akinwumi Adesina, who recently won the award of Forbes Africa Person of the Year, attributed his achievements to the “immense support of Jonathan.”

The Jonathan administration has stepped up Nigeria’s agricultural potential, not only to improve farming, but also reduce food importation.

In other words, his agenda is to ensure food security, reduce expenditure on food import, diversify the economy and create new jobs in what can be called backwards integration.

In the area of cocoa transformation/revamping, about 114 million seedlings of high-yielding and early-fruiting hybrids were distributed to farmers free of charge last year, along with support for production inputs.

Last year, Nigeria consolidated on its standing by producing 40 million metric tons of cassava. This has encouraged Cargill, the world’s leading producer of starch, to begin investing in Nigeria to produce cassava starch for use in production of sweeteners.

Unilever would soon start the production of sorbitol for use in toothpaste and oral hygiene products from the same cassava.

To encourage local production of rice, government embarked on a massive investment in dry season farming in Kogi, Kebbi and Zamfara states, resulting in the production of one-third of the country’s rice demand.

The federal government also supported farmers with improved seedlings of cotton and sorghum, leading to the resuscitation of large farmlands and cotton-based industries, especially in the north.

Last year, the agricultural sector attracted $4 billion from food crops, to export crops, fisheries and livestock and the number of private sector seed companies grew from 10 to 70 within one year.

It is said that Nigerian farmers produced over eight million metric tonnes of food, which is 70 per cent higher than the set target of five million tonnes.

The production revolution stimulated the creation of two million jobs all across the rural areas.

It does not make sense to plan without figures; hence the federal government launched the farmers’ national database system under which 4.2 million of them were registered in 2012.

The Electronic Wallet System (e-wallet), which allows farmers to get their seeds and fertilizer, using electronic vouchers sent directly via mobile phones, has put paid to the atrocities of middlemen.

In the first year, 1.5 million farmers received their subsidised seeds and fertilizers through this means, impacting about eight million persons.

In infrastructure, about 16 months ago, the federal government flagged-off of the Lokoja-Benin dualisation project and the construction and rehabilitation of the Manyam-Ushongo- Lessel-Kartyo-Tse-Agberagba-Oju Agila road, Phase 1 on March 4.

Same for the Sokoto-Tambuwal-Jega-Kontagora-Makera road, Phase 1, on May 17.

The rehabilitation of Kontagora-Rijau-Tungan Magajia road, Section 11, Phase 1 in Niger State also commenced, while the Gombe- Potiskum and Gombe Bye-Pass in Gombe State were commissioned on June 10, last year, along with the Gombe-Numan road.

Road users on the Lagos-Ibadan expressway got a respite when the President flagged off the reconstruction and expansion of Sections 1 and 11.

The Ibadan-Ilorin, Section 1, was also commissioned, as the federal government flagged off reconstruction and rehabilitation of Bida-Mokwa road on November 14, last year, while rehabilitation of Akure-Ilesha road was done a day after.

There is progress on the East-West road, with 772 of the 1,031 culverts completed. Of the 41 bridges on the road, 36 are near-completion.

The federal government is also expecting a loan of $300million (N48 billion) from the African Development Bank (AFDB) for the project.

In aviation, it had developed a master plan and revised the Civil Aviation National Policy for the first time in over 12 years.

All 22 federal airports are being remodelled, while for the first time, 16 airports close to the country’s food baskets have been designated for perishable cargo enhance preservation, conditioning and transportation.

It goes without saying that there can never be growth in the real sector if power generation is not in order; hence the government launched the Power Sector Reforms Road Map in 2010, with the private sector now participating and power generation and distribution improving.

In the education sector, apart from successfully ending the long teachers’ strike, another signature project of his is the Almajiri Education Programme, which has become an international brand for Nigeria (the Pakistani government is currently studying the module to implement same).

The administration has started the process of constructing another 200 such schools to be delivered this year.

By next year, Jonathan hopes to deliver 400 Almajiri schools to the less privileged Nigerian children.

Similarly, the Girl-Child Education programme has produced 16 specialised schools to train the girl-child, with over 500,000 teachers and basic education administrators trained.

It also collaborated with the World Bank to develop centres of excellence in science and technology in some Nigerian universities.

What further proof do we have to give Jonathan another term than the fact that the Nigerian economy remains robust and very promising, as the GDP growth rate is sustained at 6.7 per cent, making it the fastest growing economy in Africa.

Therefore, it makes sense to allow Jonathan to go for another term to finish what he started and initiate new things for his successor in 2019.

Next post Peace, most expensive commodity in Nigeria – Abubakar