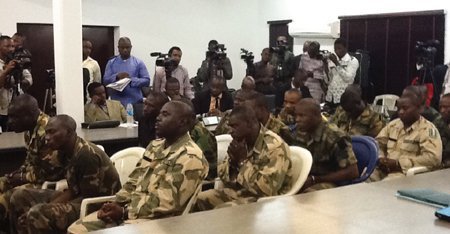 THE trial of 59 soldiers accused of two-count charge of conspiracy and mutiny continues Thursday, even as the prosecution witness confirmed that 47 of the soldiers participated in the operations.

At the trial of the soldiers yesterday at the Mogadishu Cantonment in Abuja, the President of the General Military Court Martial, Brigadier General Musa Yusuf restated the commitment of the Nigerian Army to fair hearing, justice and fairness in the trial of the 60 soldiers accused of breaching the law.

He said the two (2) Corporals, nine (9) Lance Corporals and 49 Privates are being charged with “mutiny, contrary to and punishable under section 52(1)(a) of the Armed Forces Act Cap A20 laws of the federation” and conspiracy to commit mutiny, punishable under the same Act.

On both counts, besides LCpl Anthony Simeon who is on medical excuse, the remaining 59 accused persons pleaded not guilty to both charges.

When the first Prosecution witness Lieutenant Colonel Timothy Opurun mounted the podium, he confirmed to be the Commanding Officer of the 111 Special Forces Battalion troops.

In his statement, Opurun said the soldiers “at Mulia Primary School on the 4th of August 2014 refused to join” their compatriots “for an advance operation to recapture Delwa, Bulabulin and Damboa in Borno State from Boko Haram terrorists”.

In the course of cross examination by the lead defence counsel, Femi Falana, Opurun said that 68 soldiers actually refused to participate in the operation and deserted, out of which eight (8) are still at large and declared Away Without Leave, which is another punishable offence. It was said that 13 of them were arrested by the Military Police, while 47 others voluntarily rejoined their comrades when the need for reinforcement arose.

“As we were attacked by the terrorist, we tried to defend but the fire power and number of our attackers overpowered us, so we withdrew to get support…as we got the support we need, 47 of the soldiers who deserted were among the troops that came for reinforcement and the terrorists were overpowered.”

Previous post Ebola virus’ outbreaks in Nigeria, Senegal not quite over, says WHO