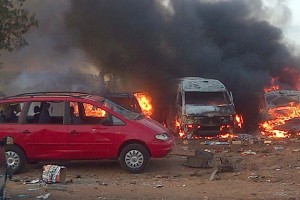 TOPSHOTS Vehicles burn after an attack in Abuja on April 14, 2014. Twin blasts at a bus station packed with morning commuters on the outskirts of Nigeria’s capital killed dozens of people on April 14, in what appeared to be the latest attack by Boko Haram Islamists. The explosions rocked the Nyanya station roughly five kilometres (three miles) south of Abuja at 6:45 am (0545 GMT) and destroyed some 30 vehicles, mostly large passenger buses, officials and an AFP reporter said. AFP PHOTO / STRSTR/AFP/Getty Images