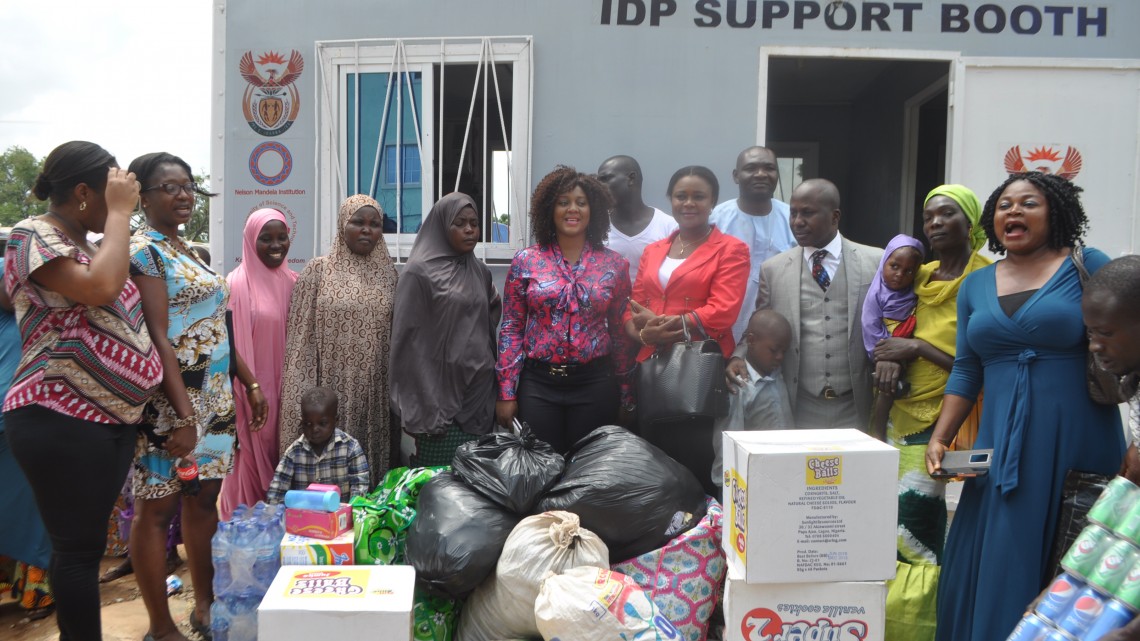 Last April, 2014, I wrote in the Guardian newspaper an article titled: Nigeria at War: The case for State of Emergency. I wrote that article because of what was happening in my country and the nonchalant attitude of my country men and women who goes about their business as if our men, women and children are not dying daily. I have three beautiful daughters, who are still finding it difficult to recover from the shock and agony of the abduction and taken into slavery of the Chibok girls.

Then quite recently too, I saw on the front page of Daily Trust newspaper photograph of rescued Nigerian men and women with their children all clustered in low spirit inside a truck that was conveying them back to Nigeria from God knows where. Jesus wept! My heart bleeds for my people. It was Charles Francis Adams (1807 – 86), son of John Quincy Adams, who said:”it would be superfluous of me to point out to your Lordship that this is war”. Seriously, Nigeria has been at war with itself since 2010 when Boko Haram started operating like Mongol hordes.

At first, the Muslim North was silent because the operators were Muslim; “Non Enim facile de his quos Plurimum diligimus turpitudinem suspicamur” meaning:”For we do not easily expect evil of those we love most”. Yet the South was busy with their Niger Delta and OPC and kidnapping and armed-robberies so nobody took notice. Even now, Nigerians who are far from the genocidal scene behave as if North-East or North-West is in Asia.

Boko haram promotes a version of Islam which makes it “haram” or forbidden, for Muslims to take part in any political or social activity associated with western society. The group’s official name is Jama’atu Ahlis Sunna Lidda’a wati wal – Jihad, which means “People Committed to the Propagation of the Prophets Teachings and Jihad”. Boko Haram loosely translated from the North-East Hausa language, means “western education is forbidden”. These people should have lived in ancient Greece. In ancient Greece, according to John Lloyd et el, in 1,227 quite interesting facts; the word “idiot” meant anyone who wasn’t a politician.

In April 2014, Boko Haram abducted more than 200 school girls from Chibok village in Borno state into slavery. In August of 2014, Mr. Shekau declared a caliphate in areas under Boko Haram’s control with the town of Gwoza as its seat of power. “We are in an Islamic caliphate” said Mr. Shekau, flanked by masked fighters and carrying a machine gun. “We have nothing to do with Nigeria. We don’t believe in this name.” Later, Mr. Shekau formally pledged allegiance to Islamic State (ISIS) which gave the body an international dimension.

On May 29, Boko Haram struck, seven people were reportedly killed by twin explosions at a village wedding in Borno on the same day. On May 30, a day after President Buhari’s inauguration, a suicide bomber struck at a mosque in Maiduguri during the afternoon prayer session killing 16 people. On the same day on the Dala Lawanti, west of the city, Boko Haram insurgents killed 13 people. At 1pm, on June 2nd my birthday at the busy meat market in Maiduguri 30 people died. What an agonizing birthday for me. My Country men and women and children are dying daily and I am powerless. But I can write their story. Chinua Achebe was right; “Writers don’t give prescriptions. They give headaches”.

I can tell Nigerians what we all know is happening to our brothers and sisters, the pain and agony, sorrow and the shame and confusion our people in Borno and Adamawa and Yobe are carrying as a burden today. We all know and we all are aware of the death and rape and slavery that are recklessly going on in Maiduguri, Baga, and Wagir in Gubja Local government of Yobe state. Since President Buhari came to power more than 300 Nigerians have died in the hands of Boko Haram and yet, it appears, Nigerians do not give a damn.

It is amazing, unbelievable, the human and material resources America, Britain or for that matter any other civilized country will put to looking for one missing child or the shooting of one of its citizens. Here we are, hundreds of our people are dying and everyone pretends its happening in the distance. It is happening right in front of us.

General Robert E. Lee in a letter to his wife on December, 1862 wrote “what a cruel thing is war: to separate and destroy families and friends and mar the purest joys and happiness God has granted us in this world; to fill our heart with hatred instead of love for our neighbours, and to devastate the fair of this beautiful world”. My wife loves watching crime channels, so to make her happy, I have had to join her in watching crime channels.

I have been having sleepless night because of the photo of those little children I saw on the front page of Daily Trust, I promised myself I will do something about this insanity, stupid war and foolishness. I called a friend Tola Ogunubi and Usman Shuaibu to accompany me to the Durumi camp of the Internally Displaced Persons (IDP), those whom Boko Haram has turned into refugees in their own country. When we got there, what I saw, the frustration, the shame, the humiliation, the pain, the death, the sick, the pregnant, etc. I knew Nigeria is not yet a Nation. Nigeria is an incorporated entity. Nigeria group of companies. No Nation will abandon its own people in that manner.

I spoke to a boy, Ahmed Saidu, whom a good Samaritan, has provided barbing kits for and is now a barber. –Ahmed said he saw his father Ibrahim Saidu slaughtered but he pretended to be dead when his younger brother’s head was hacked off. Hajia Hauwa is eight months pregnant, I dare not ask her who is the father especially after what Hajia Halima told me. She was repeatedly raped. Her daughters were raped severally. She was there. Her husband was there too. Then they killed all of them. She does not know how she survived. The camp coordinator told me he is a living miracle to have been able to get out of that madness.

Then I attempted to talk to the kids: where is your mother? Babu! Where is your father? Babu! Ask the pregnant women, you are all pregnant have you seen a doctor? Babu! Have you eaten? Babu! My fellow Nigerians, Durumi camp that has about 1200 IDP is not in Adamawa, it is not in Yobe, it is not Borno. It is in Durumi very close to the beautiful training school of the Federal Inland Revenue Service, FIRS, in Abuja. This is the shame of our people fellow Nigerians. Yes, Government can and should do something but what have we as citizens done? Are we truly all Nigerians? Are we a Nation?

A good Samaritan, has arranged some Youth Corpers to teach the children some basic subjects in a make shift school. I held the chalk in my hands and I wrote A and the children shouted A, I wrote B and the children shouted B, then tears began to flow. At that moment, I was thinking of myself, how I lost my father at age 10, my mother an illiterate in western sense who has vowed that I must get education. I got it. I am now thinking, could some of these kids be Wole Soyinka, Chinua Achebe, Bamanga Tukur, Muhammadu Buhari or Goodluck Jonathan that never had shoes. Of course, none of them had shoes, most of them had nothing.

I spoke to Zainab Halim Garuba who told me that she is a widow, and one of her husband’s wishes before he died was that she must help victims of this senseless war. She devoted her time and resources to help the camp. She said first we moved them to an uncompleted building, later, someone provided the land and the person says he needs the land back. Where do these people go?

I deliberately refused to look at her. She has seen enough pain; I do not need to add mine. I asked what about toilets? What about mattress? What about medicals? What about food? What about cloths? That is not really the problem now. “When we first came to help the people the men were hostile, smoking and drinking, they were lost. They thought Nigeria had forgotten them. They lived in anger and pain and frustration. But we started encouraging them, talking to them and praying with them. They are just beginning to come back to life. Do not forget some of them lost an entire family and everything” she said.

It is people like Miss Kiki who organized those Youth Corpers to teach those kids ABC and the widow, Zaniab that gave me some hope for Nigeria. They make me go back many years on my minds’ eyes to my village of Yenebebeli when everybody was his brother’s keeper.

President Buhari himself an Ex-Army General and one who fought the first civil war and was a major player in bringing that bad dream to an end, will paraphrase Dwight D Eisenhower, “ I hate war as only a soldier who has lived it can, only as one who has seen its brutality, its fatality, its stupidity”.

I Place my hope on Buhari to bring this civil war to an end. The appointment of Brig – General Iliya Abbah as new commander of Multinational Force on Boko Haram, the cooperation of our Neighbors, Chad, Cameroon, Niger and Benin Republic will be decisive in bringing this war to an end. This is the time that friends of Nigeria especially the USA must exit Nigeria from the Leahy law and help us equip our military. The world powers should know that aside that this is a civil war, it is also terrorism and terrorism does not have boundaries. It’s like the dreaded Ebola Virus.

To my fellow Nigerians, please let us help our brothers and sisters that are refugees in our country. We can help. Dangote may decide to send rice and sugar, Adenuga may decide to do something, then we, one by one, will contribute our corns. What’s important is bringing back that old forgotten spirit that helped me to finish primary school and secondary school, and university even though I had a mother who never went to school and had nothing.

Now there is danger in the other choice of not doing anything. That is dangerous. The young people I saw there, if we do not show them love, just wait in ten years, in five years, they’ll come back to terrorise us. They will kill us, they will rob us and when we ask them why, they will answer, when we needed you, did you help? James A. Garfield on 25 of June, 1864 said: “A Nation is not worthy to be saved if in the hour of its fate, it will not gather up all its jewels of manhood and life and go down into the conflict, however bloody and doubtful, resolved on measureless ruin or complete success”.

President Buhari as a matter of urgency must direct the appropriate agencies; National Directorate of Employment (NDE) to provide skills acquisition and implement the graduate employment program; National Youth Service Corps (NYSC) to provide teachers and doctors and pharmacists for the various camps in the country.  It is the time our young men and women could be put to service; Ministry of Health and Ministry of Education and NEMA etc should also come out to assist. It is most worthy if international organizations such as the Red Cross and Doctors without Borders can give support. We also need in those camps social service workers and sociologists and psychologists to help those traumatized people recover. May God help us!