We won’t wait for oil to be exhausted before exploiting resources in other parts of the Country – Victor Attah, Confab Committee Co-chair

In this interview with PREMIUM TIMES, the Co-Chairman of the National Conference Committee on Devolution of Power and former Governor of Akwa Ibom State, Victor Attah, speaks on how decisions were reached during Committee’s stormy sessions.

The Committee on Devolution of Power has just concluded its work. As Co-Chairman, are you satisfied with what the Committee has done?

I am very happy that the Committee achieved what it did for Nigeria. We were charged with the responsibility of devolving power and we debated on the legislative list. We were to decide what will remain in exclusive list, what should go to the concurrent list and what should go to the residual list. We have been through with that and we are quite satisfied with what we were able to do.

How many items did the Committee moved from one list to the other?

Knowing that we want fiscal federalism, we have been able to say this is what Federal Government alone should do, this is what the state should participate in and this is what the states alone should do. We did that without knowing from the Committee on Restructuring whether we are even going to have the states as the federating units or regions as the federating units.   So we have had to work with what we knew until other Committees make their own determinations from their points of view.

Can you tell Nigerians some of the strategic decisions that have been taken by the Committee on Devolution of Power?

The main issues that will help this country have been anchored on this Committee. If the recommendations of this Committee are accepted, Nigeria will be re-launched in the sense that every part of the country will develop. I saw an article the other day about the economic resurgence of the North. It will not only be economic resurgence of the North. There is going to be an economic resurgence of the entire country. With that we will be able to move away from this business of oil being the only thing that sustains us economically. We will move into other areas and achieve total diversification to the extent that more money will accrue to the Federation Account. Everybody will benefit from Derivation Fund and we will get to a situation where employment opportunities will be available for Nigerians. That is one of the major things we have achieved as a Committee. Although I don’t know what will come out of the final report of the Conference, we have also made it possible for the states to be involved in the development of mineral resources.

The issues of Derivation and Onshore/Offshore Oil Dichotomy were hotly debated and at a point, it seemed the South-South was going to lose what it is enjoying now. How did you strike the balance for the status quo to be sustained?

We did it through the integrity and patriotism of members of the Committee. We decided to leave things as they are so that we will not bring a major disequilibrium in the system. When everybody has had an opportunity to develop their own resources and enjoy 13 percent Derivation, maybe the agitation for increase will come from everybody. Of course, this will not be the last of the Conferences we will have in the country. And in any case, how much is given may be by negotiation and will not come through constitutional amendment because the Constitution has already provided the minimum as 13 percent.

Granted that the derivation will be increased when the resources in other parts of the country are fully exploited, are you suggesting that the policy will be implemented retroactively to benefit the oil-bearing communities of the South-South who are only enjoying 13 percent now?

Are you suggesting that at that time the resources of the South-South will be exhausted? Let’s not make a mistake about that. We have the list of minerals that are available in each state of the Federation. So even along with the oil, the South-South zone will be able to develop some of the resources that they are not developing now. We will be able to revive agriculture. In fact, at a time, it was palm oil and coal in the East, rubber and forestry products from the Mid-West, cocoa from the West and groundnut from the North. All the parts of the country participated at that time and it can be regenerated.  Those things can be revived. By the time we do that, the South will enjoy a greater derivation. We are not talking about you exhausting your own before I start exploiting my own. No. We are talking about a general regeneration.  We are talking about the development of this country along proper economic lines.

How confident are you that your Committee’s recommendations will scale through the plenary next week?

I don’t want to believe that the plenary is made up of unreasonable people. Certainly not and if what we have done stand to reason, then why should it not scale through the plenary?

If the recommendations scale through the plenary, how will they get into the Constitution? 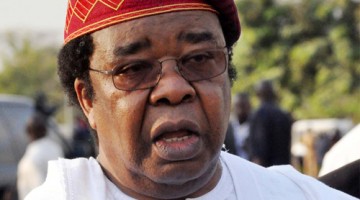 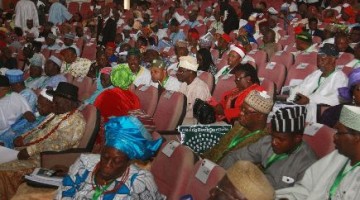