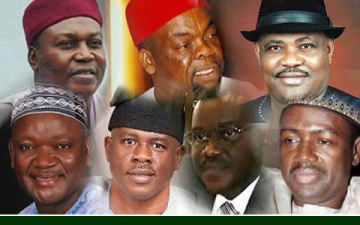 The political tempo in seven states is expected to rise as their ministers have quit the Federal Executive Council.

The seven who have indicated interest in vying for governorship positions in their respective states include Labaran Maku (Information); Onyebuchi Chukwu (Health); Emeka Wogu (Labour) and Musiliu Obanikoro (Minister of State, Defence).

They were bade farewell by President Goodluck Jonathan and other members of his cabinet   during Wednesday’s Federal Executive Council meeting in Abuja.

At the emotion laden valedictory session, Jonathan said   although he was aware of the ministers’ ambitions, none of them has sent in his resignation letter.

He therefore directed them to   send their resignation letters to the Secretary to the Government of the Federation, Anyim Pius Anyim, latest by Monday.

He said the Peoples Democratic Party on which platform they seek to contest the   election allows them till Monday to resign their appointment.

The President added that the valedictory session was important because they would not be attending the next meeting if they did not change their minds.

While saying there was still room for those who wanted to reconsider their steps, Jonathan warned that such grace would no longer be available to them once they have sent in their letters.

The President said, “I want to make it very clear that as of this morning, about seven members of council may, and I use the word ‘may’ because you don’t conclude anything in politics. So, seven of us may not be here next Wednesday if their plans continue.

“But we may not say they are not with us until they write to us through the Secretary to the Government of the Federation.

“They are still ministers of council but assuming between now and next council, if they decide to go on with their plans, it is only proper we wish them well, assuming we don’t see them again.

The President thereafter directed the Minister of Power, Prof. Chinedu Nebo, to thank the seven ministers on behalf of the council.

Nebo, in his tribute, said the affected ministers had rendered distinguished service to the cabinet and Nigeria and were ready to go and express what they had learnt from the President.

He said serving under Jonathan was like a school of apprenticeship as he continued to remain calm in the face of unwarranted provocation.

He said, “They (the seven ministers) came, they saw, they acquired knowledge and are going to serve in states.

“We wish them well and God’s guidance. We have played as team members. We will surely miss them. We pray that God will be with them.

“We will be so happy if by next year, many of these our brothers, if not all of them, are sworn in as governors in their states and we can see and know that we have people we can relate to at all times with the best of minds and will.

“We wish them well and we will continue to work together for the transformation of our country under your leadership, who has given us this transformation agenda that is doing so much to give the best of service of governance to our people.”

Maku later delivered an emotion-laded speech in which he thanked the President for the opportunity to serve and their colleagues for their support.

He described the moment as very difficult and emotional for him and his colleagues who he said had decided to take a leap of faith.

He commended the President for his patience which he said had led to stability of leadership devoid of unnecessary sacking of ministers.

He however on behalf of his colleagues apologised to the President in case they had wronged him in the course of carrying out their duties.

While extolling Jonathan’s leadership qualities, Maku said Nigerians would have been playing in the league of big countries like Brazil but for the various challenges being faced.

He said, “This is truly a very difficult and an emotional moment for me and my colleagues who are about to take a leap of faith in our lives as individuals and as officers of state.

“A time comes in the life of people when they make decisions when they are convinced that those decisions will further the vision, development and future of their country under a leadership that they believe in.

“All of us here who have been named by you (the President), who may not be here by next Wednesday, owe God Almighty eternal gratitude for connecting us with you which has led to our elevation to serve at this highest level of executive authority in our country.”

Maku said he and his six colleagues were exiting the cabinet with the huge experience they had gathered under the President.

“We have learnt a lot today, some of those qualities include the capacity to stay focused in spite of distractions, in spite of torments, in spite of all the things that are said about you, you have remained focused and that indeed is a sign of strength.

“The other is to keep your eyes on the ball, of your policy which today as I have said is already giving a lot of results.

“The last in my opinion which is very important is that you have a cosmopolitan approach to leadership in Nigeria. You have been able to bring together diverse people from all walks of life, you have resisted temptations to religious sentiments, resisted persuasions for ethnic or sectional sentiments, you have remained a unifier as every leader in a diverse country should be.

“And so we are going out with some of these lessons which we have learnt quietly from you in the last four yours,” he said.

Meanwhile, indication emerged that the Minister of the Federal Capital Territory, Senator Bala Muhammed, may have dropped his governorship ambition.

Muhammed had earlier indicated interest in contesting the governorship election in Bauchi State.

His name was however conspicuously missing among the ministers the President announced as having shown their desire to exit the cabinet.

He was however present at the Wednesday meeting.

Next post Lagos to join oil producing states in 2015