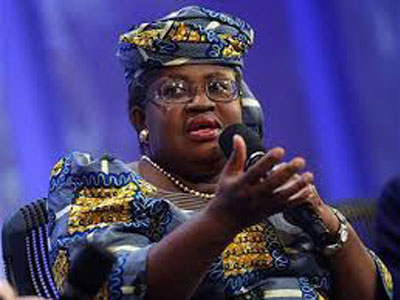 • Revises 2015 budget benchmark to $73 per barrel • Rules out emergency printing of currencies, domestic borrowing, others

FACED with the reality of global drop in oil price, the Federal Government yesterday announced measures to cushion the effect on the economy, while insisting that it was on top of the situation and as such, no need to panic.

Meanwhile, there seems to be no cherry news yet for petroleum exporting countries as indications emerged that the plummeting oil prices may continue into 2015.

Also, the Organisation of Petroleum Exporting Countries (OPEC) will meet in Vienna next week Thursday, where it is, among other issues, expected to discuss its oil production policy within the prevailing circumstances.

Minister of Finance and Coordinating Minister of the Economy, Dr. Ngozi Okonjo-Iweala, who briefed reporters in Abuja yesterday, also announced that government was revisiting the $78 per barrel price provided for in the Medium Term Economic Framework (MTEF) and proposed for 2015 budget.

The figure would now be revised and a new figure of $73 per barrel was now proposed to the National Assembly. The Guardian had last week exclusively reported implications of the volatile oil prices for the economy.

In the meantime, government would take money from the excess crude account to absorb some immediate shocks, the minister said, noting that government was not considering printing extra currencies to check the development.

Government, she stressed, was also compiling the list of luxury goods hitherto part of government expenditures with the aim of pruning such down.

“We are putting the list together. Those better off in the society will be expected to give a little more to the treasury,” she noted.

The minister noted: “Printing money is not a way out. Inflation will spiral if we print money to manage the situation. We will continue in the meantime to manage the economy as we have always done. There is no doubt that oil prices will keep going down. But the economy continues to exhibit some strength. We need to keep growing in order to keep creating jobs.  Every economy that is well managed like ours doesn’t just wait for things to happen to them.

“We won’t compete by printing money. We will not also compete by borrowing. But we will borrow concessionary loans to fund infrastructure.  We don’t want to do local borrowing.”

Noting that the nation’s external reserves were falling, she stated, however, that the country would use part of the excess crude account before the end of the year.

On the amount to be taken from the excess crude, she noted: “We will not deplete it. But we will take about half of it…”

She called attention to the need for the country to work together as one at this period.

The minister stressed: “We have shown that when Nigerians work together, we win. We did it for Ebola and we succeeded. Panic is not a strategy in this situation.  All we ask of Nigerians is to show understanding. We can’t just print money and be spending. You peg your spending to what you can earn.”

Noting that the government was concerned about ‘the common man’, she announced that salaries of government workers won’t be affected by the development, but noted that travels by government officials would only be permitted when it is absolutely critical, while a check had been put on foreign travels.

Okonjo-Iweala stressed how the Ministry of Finance had been closely watching the global trend in oil prices.

She added: “Given the nature of the oil market, we needed to see the extent and trend of the oil price in order to take the right measures. Panic is not a strategy. It’s important that our strategies are based on facts and a clear understanding of both the strengths of the economy and the challenges posed by the drop in oil price, which is currently at $79 for our premium Bonny Light Crude.

“The drop in oil prices is a serious challenge which we must confront as a country. We must be prepared to make sacrifices where necessary. But we should also not forget that we retain some important advantages such as a broad economic base driven by the private sector and anchored on sound policies. Our strategy is to continue to strengthen the sectors that drive growth such as agriculture and housing while reducing waste with a renewed focus on prudence.”

She saw the falling oil prices as an opportunity for Nigeria to channel more energies on greater diversification and refocus efforts towards the non-oil sectors in preparation for a future with less oil revenue.

She also drew attention to the quest for more revenue from the non-oil sector, noting that the Federal Inland Revenue Service (FIRS) had been challenged to step up its revenue gathering.

Her words: “In this regard, the collection target for the Federal Inland Revenue Service (FIRS), which has been working with Mckinsey to increase receipts, will be revised upwards for next year. The country has had good success in reaching the initial target set this year of N75 billion; so far N65 billion of this has been collected. For 2015, the revised target is N160 billion above the 2014 base.

“As part of the efforts to reduce expenditure, international travel within the public service will be severely curtailed. But critical infrastructure projects will not be affected because they are key to economic growth and development as well as job creation.

“The implementation of the new mortgage system including the current processing of over 66,000 applicants for mortgages will go on as planned so that the country reaps the strong benefits that will come from unleashing the housing revolution which is attracting serious interest from local and international investors.

“Also unaffected are public sector wages as well as key initiatives in education, health and other areas critical to the country’s human development. A key initiative on the revenue side is a surcharge on luxury items details of which are being worked out.’’

She spoke further on the calls for government to print more currency.

She added that government was working with the National Assembly to accelerate the winding down of agencies that are not productive to the system as recommended by the Steve Oronsanye report.

She said: “We are looking at the laws of the agencies that are not contributing much to the economy. The committee rationalising this would ensure that we build on this to save money for the economy.”

Meanwhile, OPEC has maintained production averaging 30.08 million barrels per day so far in 2014.

Global oil prices have fallen by more than 30 per cent since mid-June, and in its latest monthly oil market report, the IEA said oil markets were entering a “new chapter” in their history, and that a return to higher prices in the short term seemed unlikely.

“Our supply and demand forecasts indicate that barring any new supply disruption, downward price pressures could build further in the first half of 2015,” the IEA said.

Indeed, on Thursday last week, Brent crude futures slipped below $80 per barrel for the first time in more than four years, and earlier Friday dipped below $77 per barrel.

“While there has been some speculation that the high cost of unconventional oil production might set a new equilibrium for Brent prices in the $80-$90 per barrel range, supply/demand balances suggest that the price rout has yet to run its course,” it said.

But the IEA said production growth was showing few signs of abating.

“While falling prices may well trim investment in U.S. light, tight oil, such potential cuts should not be misconstrued as a production drop, and indeed would likely pale in comparison with recent gains in LTO productivity. Cost reductions and efficiency gains in LTO production have been constant, and price pressures would only provide more impetus for producers to cut costs further.”

The IEA said that steep price declines tend to be “self-correcting” over the long run as spending is cut eventually or production is otherwise disrupted.

But, it was quick to caution against early optimism, saying, “such cyclical factors take time to unfold, however, and should not blind us to the deep structural changes at work in the oil market. Economic development no longer spurs oil demand growth as it once did, especially in the absence of wage gains.    China, the top source of incremental oil demand in recent years, has entered a less oil-intensive stage of development, while years of high prices have let innovative technologies unlock untold resources in North America and likely soon elsewhere.

“The steeper they are, the less sustainable oil price swings tend to be. But a return to previous price highs may not be a close prospect, as it is increasingly clear that we have begun a new chapter in the history of the oil markets.”

Another key factor in the global oil picture is projections for future oil demand, and the IEA on Friday left its global oil demand forecasts for this year and next largely unchanged, revising up the estimates for both 2014 and 2015 by just 40,000 barrels per day.