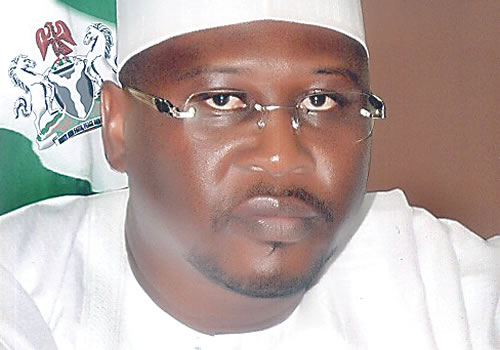 Speaking at the state House of Assembly on Tuesday, Fintiri said that “the legislature, which is the defender of democracy,” is required to exercise the constitutional duty of ridding Adamawa of bad governance once again without hesitation.”

Fintiri stated this during the plenary session on Tuesday, when he addressed members of the state House of Assembly on his resumption as the Speaker.

Fintiri, who presided over the day’s plenary, expressed gratitude to the members.

“As I happily resume my duties as the Honourable Speaker once again, after a brief but action-packed stint as the acting Governor of Adamawa State, I thank Honourable colleagues for the overwhelming co-operation I have enjoyed as your ambassador in the executive arm,” he said.

He thanked them for their personal sacrifices and immense pressure which they had endured to ensure that “our democratic intervention against bad governance and administration succeede, in line with the popular demand of the people of Adamawa State.”

While commending members for having confidence in him as a worthy representative, the former acting governor said that what was achieved in the short time he was in governance would not have been achieved.

“As a law abiding citizen and the number one law maker, I have taken events that occurred in the last couple of days in my their stride and I pledge to stand by the truth, no matter the blackmail and intimidation,” he asserted.

Fintiri said his brief stewardship as the acting governor had resuscitated the state, which was on a “life support in the past seven years.” He requested the people of the state to disregard the current rumour that the interim government he led for 86 days would be investigated for spending N18bn.

“I challenged those behind this ridiculous claim to provide a shred of evidence for just N1m that was expended illegally. I am aware that everything is being done to think the integrity of my administration but this shall not succeed,” he said.

It will be recalled that the state assembly last week resolved during an emergency sitting to allow Fintiri to continue as the Speaker since he was on a state assignment.

The Chairman, House Committee on Information, Mr. Adamu Kamale, had said the House took the decision in view of his (Fintiri) impressive performance.

Kamale said Fintiri did not need any formal inauguration, “rather it is a home-coming.”

Meanwhile, Governor Bala James Ngilari has approved the appointment of Ibrahim Andrew Welye as the Secretary to the State Government, while Prof. George Moses would serve as the Deputy Chief of Staff. The governor also appointed Abdulrahman Bobboi as the Chief of Protocol.