Dickson And The Battle For 2015 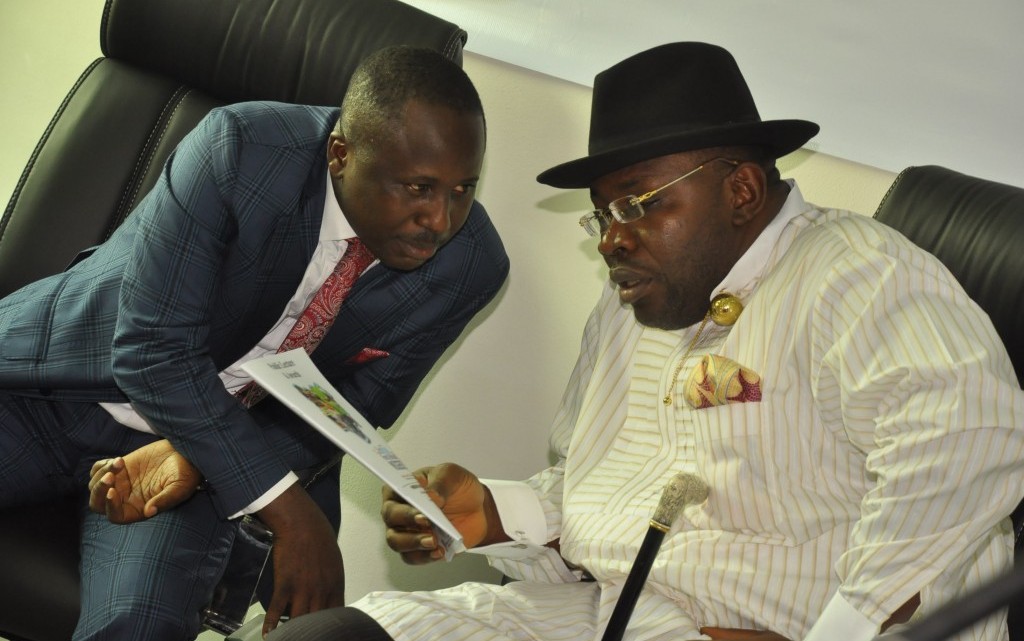 “WHAT we call the beginning is often the end. And to make an end is to make a beginning. The end is where we start from,” said T. S. Eliot.

In the beginning, I wanted to write about the late Patrick Sawyer and his invention of Ebola in Nigeria. Then the downing of fighter jets in Eastern Ukraine caught my attention. Then the news that President Goodluck Jonathan would declare for 2015 next month became attractive.

Yet, I chose to discuss Bayelsa State Governor Seriake Dickson, because of what Prof Robert Jenning, president of Lincoln University, said: “Corruption, lack of commitment and development by leaders in Africa has been a dominant constancy in American discourse on Africa, but what the governor of Bayelsa is doing has changed many opinion positively.”

True, all what Dickson is doing will not be finished this year, nor will it be finished next year, nor in the life of this administration, nor during his next tenure, nor even perhaps, in our lifetime. But he has begun the laying of a solid foundation for infrastructural development and reawakening of Ijaw spirit of discipline and contentment.

His pursuit of education for all, which is the foundation and golden bridge to the future, cannot be faulted.

Dickson was not my friend. In the past, I watched him from afar with measured respect and suspicion; the kind of suspicion attributed to politicians.

During the campaigns, the things Dickson said, his humility, boldness, courage, passion, determination, commitment, will and convictions began to attract my attention. Yet, I was not “bought”.

Plus ca change, plus c’est la meme chose (the more things change, the more they look the same). Change is not made without inconvenience, even from worse to better.

On assuming leadership of Bayelsa State, Dickson, in his word and deeds, began to command the respect and support of even those of us who were skeptical.

I, for one, was won over first by his boldness; De l’audace, et encore de l’audace, et toujours de l’audace (boldness and again boldness, and always boldness). Boldness in taking difficult and controversial decisions. His audacity to confront the difficult terrain of Bayelsa is infectious and mesmerising.

As a member of the immediate past Bayelsa Advisor Council (BAC), we were one of the first groups to have audience with him after his swearing-in. On that occasion, I recognised two things in him- passion for the Ijaw nation and passion and sacrifice for his people.

Let me be quick to say that you will not see the true picture of Dickson from afar. Observing from afar, Dickson is like beholding surrealistic painting; he is complex, deep superficial, national, irrational, cold and warm.

But at close quarters, for Dickson, ‘no free lunch in Freetown.’ Qu’ils mangent de la brioche (let them eat cake, if no bread). Yet, he is warm, a good listener and accommodating.

Dickson is a complete Ijaw man, having been part of the Ijaw Youth Congress (IYC) and the Ijaw National Congress (INC). His sincerity of purpose, transparency and accountability speak volume of the man and the true meaning of Ijaw/Izon, which is truth.

Now, talking 2015, the big question is what has Dickson done to merit a second tenure? In my view, and having seen and talked with Dickson on many occasions in Abuja, Port Harcourt, Lagos, South Africa, Ghana, America and Israel, especially with regards to his passion for education, I can only liken his case to the hullabaloo that erupted with United States (US) President Barack Obama’s nomination by the Nobel Peace Prize Committee.

Most people, even Americans, believed Obama at that time had not done enough to merit the prestigious Nobel Prize. But the chairman of the committee, in defending the committee’s decision said: “This prize is given to Obama for hope and encouragement and for things yet undone.”

Walter Bagehot, the English economist, positioned that “by the structure of the world, we often want, at the sudden occurrence of a grave tempest to change the helmsman, to replace the pilot of the calm with the pilot of the storm.”

Ahead of 2015, agreed there should be robust debate, because that is what democracy is all about, but we must examine the character of a leader.

The ultimate test of a leader is that he/she leaves behind him/her in other men/women the conviction and the will to carry on.

One of the great exhibitions of a leader of Dickson’s stature can be illustrated through Nicolo Machiavelli, the Italian Political Philosopher, who said: “The first method for estimating the intelligence of a ruler is to look at the men he has around him.”

If anyone was or is still in doubt, the establishment of Bayelsa Development and Investment Company (BDIC) and its members, or the Bayelsa Agricultural   Development Board (BADB), or the Bayelsa Historical and Culture Committee (BHCC) speaks for itself.

Let me say here again that democracy is about competition, healthy competition. Let all of us who want to contest come out in our numbers, but first let us show our pedigree, what we have done for our society, where we have worked, what we have to offer.

This is the time that the words of Josiah Gilber Holland in Wanted, 1872 will be apt, when he said: “God give us men! A time like this demands strong minds, great hearts, true faith and ready hands.

“Men whom the spoils of office cannot buy; men who possess opinions and a will; men who have honour; men who will not lie.”

While some of us speak because of the hope and the promise of tomorrow, and the courage to make tomorrow better, Dickson must understand that the very essence of a free government consists in considering offices as public trust, bestowed for the good of the state and not for the benefit of an individual or party.

I wish to remind ourselves of two profound statements of Edward Burke, the Irish-born politician and man of letters: “There is, however, a limit at which forbearance ceases to be a virtue.” Flattery corrupts both the receiver and the giver.

My little experience in government is that when people sing your praise, when people dance and wine with you, when things are non-controversial, beautifully coordinated and all the rest, it may be that there isn’t much going on.

Therefore, it is sometimes a blessing and an opportunity to look at thyself and accept criticism, for if you are not criticised, you may not be doing much.

US President John Fitzgerald Kennedy said: “There will always be dissident voices heard in the land, expressing opposition without alternatives, finding fault, but never favour, perceiving gloom on every side and seeking influence without responsibility.”

But as Thomas Jefferson, the American statesman, said: “Nothing gives one person so great advantage over another as to remain always cool and unruffled under all circumstances.”

“So little done, so much to do,” said Cecil Rhodes, a South African statesman. I agreed with Mme Deffand that: “The distance is nothing; it is only the first step that is difficult.”

In concluding my observation of the achievement of Dickson and his administration, let me submit that he deserves a second tenure for many reasons.

It is time for a governor to handover to himself (second tenure). I want to see Bayelsa take a lead in agriculture.

Today, Dickson has awarded contracts on two major fish farms and it is my hope that Bayelsa will be the main producer of fish in Nigeria.

The oil palm estate- the Bayelsa lowland palm, one of the best oil palm plantations in the world, will be expanded. The Malaysians and the Israelis, even the Americans, are falling over themselves to partner with the state.

The poultry project, proposed by a reputable foreign company, which will be the biggest poultry farm in the South-South Nigeria, will take off early January, according to the timeline of the joint venture.

The flyover at the Isaac Boro Turn is completed and work will soon start on the Etegwe-Amasoma junction, as well as the Nembe-Brass road, known as the centre of gravity for that senatorial district, is taking off soon, according to the commissioner for Works.

But today, with a four-way drive one, can get to Nembe, a dream realised in our lifetime. The Yenagoa-Swali-Akaba- Oporoma road in Southern Ijaw; the Yenagoa-Kaiama Ekeremor road; and the Ekeremo-Ageh road will definitely define Nigeria’s commercial capabilities when completed in 2016.

The airport project, securing access for the Ijaw nation and providing cheaper production cost to our oil industry, will take off during the first quarter of next year.

As Abigail Adams: “These are times in which a genius would wish to live. It is not in the still calm of life or the response of a pacific station that great characters are formed… great necessities call out great virtues.”

Today, more than ever before, I miss two of my great uncles, both at various times clan heads of Afissa Kingdom, King B.L.W. Mabinton, who advised me to build a house in Yenagoa, insisting Yenagoa would be the next New York of Africa; and King F.A. Agama, who told me that he was taken into trance and in that dream, he saw a beautiful city almost gold-like and was asked: ‘Where are you?’ And he answered, ‘London.’ But the Great one- the voice- told him, ‘you are wrong; this is Yenagoa, your beloved town.”

I had an opportunity to tell this story to Dickson, and what did he say? “Steve, if I have security and peace before I leave office, Agama’s testimony will be ours.”

I believe him, because he is continuously investing in the future and education. As of last count, the commissioner of Education told me 500 primary schools had been built and 25 boarding schools are being constructed.

Government has refocused attention on the Niger Delta University. Only recently, the governor promised the university N6 billion this year.

His scholarship programme is second to none in the country. The administration awarded 250 doctorial and 400 Masters scholarships to students in universities around the world.

I can testify to this, because I have been part of the scholarship scheme from the creation of Bayelsa to date.

Last year, I participated in sending our students to Lincoln University, the foremost Black American university in the United States (US), which has the late Dr. Nnamdi Azikiwe of Nigeria and Dr. Kwame Nkrumah of Ghana as alumni.

Temporal mutantur et nos mutamur in illis. (Time changes and we change with time). Dickson will run, just as Jonathan will run.

It is always good to remember that those on the opposite side are your opponents; your enemies could be on your own side.

I believe and agree with Victor Hugo, when he said: “There is one thing stronger than all the armies in the world, and that is an idea whose time has come.”

Let me finally end this testament on Dickson and to use former British Prime Minister, Tony Blair, to speak on Dickson’s behalf.

“I have listened and I have learned. I, we, the government is going to focus now relentlessly on the priorities the people have set for us.”

•Azaiki is the Vice Chancellor of the Institute of Science and Technology, Yenagoa

Next post Sacked Fintiri to return as Adamawa assembly Speaker