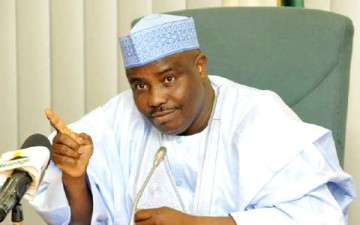 members of the House of Representatives on Wednesday endorsed new amendments to the 1999 Constitution.

A major highlight of the endorsement was the removal of the immunity clause for the President, the Vice President, the governors and their deputies. By implication, occupiers of the offices can be tried for criminal offences while still in office.

A total of 252 lawmakers voted in Abuja to adopt 70 new clauses added to the constitution.

The clauses were compressed into a constitution amendment bill already harmonised by a conference committee of the Senate and the House.

The motion for the adoption of the conference report was moved by the Deputy Speaker of the House, Mr. Emeka Ihedioha.

Ihedioha doubles as the Chairman of the House Committee on Constitution Review.

Speaker Aminu Tambuwal presided over Wednesday’s session. A total of 261 members were present in the chambers when voting started.

Out of the number, 252 voted to adopt the conference report, eight voted against, while one member abstained.

As the voting closed and the results declared, Tambuwal observed that the House had met the constitutional requirement of two-thirds majority of members to amend the constitution.

Under Section 9 of the constitution, a constitution amendment bill succeeds after it receives the support of 240 (two-thirds) members out of the total of 360.

The bill will also receive the same support in the Senate, where there are 109 members. By implication, 73 senators will vote to adopt the report for the amendment to pass.

The House did its own voting on Wednesday, awaiting the Senate’s.

Following the Senate’s voting, the document will be forwarded to the 36 state Houses of Assembly for “approval” by two-thirds of the Houses and returned to the National Assembly again for the final approval.

“We have met the constitutional requirement of two-thirds for the adoption and passage of this important bill. Let us talk to our colleagues at the state assemblies for the adoption of this report,” Tambuwal told members.

Among the clauses adopted on Wednesday was the removal of immunity against criminal prosecution for the President and state governors.

Under the new provision on autonomy, the President and governors can be prosecuted for criminal offences while still in office and stand removed from office once found guilty.

Local government councils will have full autonomy and are no longer appendages of state governments.

The new provisions have also created separate offices for the Minister of Justice and the Attorney-General of the Federation, with each office having clearly-defined roles.

The provision for state creation has been altered to accommodate a referendum to be conducted in all local governments comprising a state to decide whether a new state should be carved out of the existing state.

Next post Ebola virus’ outbreaks in Nigeria, Senegal not quite over, says WHO